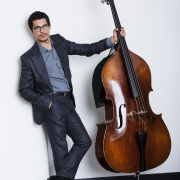 Marlon Martinez leads the Marlonius Jazz Orchestra in celebration of its debut album release Marlonius|Strayhorn, featuring the music of Billy Strayhorn and a selection of Marlon’s original compositions. Prior to the performance, Marlon will discuss Strayhorn’s legacy and the Strayhorn project, with moderator and KUSC host Alan Chapman. The GRAMMY Museum is thrilled to host this program in conjunction with the renowned Colburn School in LA.

Hailing from Los Angeles, Marlon Martinez is a young virtuoso bassist and composer emerging at the center of the resurgent Los Angeles jazz scene. He has demonstrated his virtuosity while touring with a wide range of artists, from rock icon Stewart Copeland to classical trailblazers Quatuor Ebène. Marlon is the protégé of mentor Stanley Clarke and studied with legendary jazz bassist Ron Carter in New York City. He is the music director and composer of his big band, Marlonius Jazz Orchestra. Marlon is a winner of Colburn School’s 2020 New Venture Competition and was selected as an artist-in-residence for the inaugural Amplify Series at Colburn School in 2022. This fantastic event will take place Wednesday, December 7th at the Clive Davis Theatre, located at the famed GRAMMY Museum in Los Angeles: 800 West Olympic Blvd. Suite A245. Tickets are $30. Call 213-725-5700 for more show information.