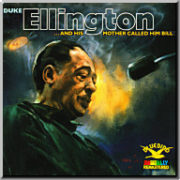 When Billy Strayhorn died of cancer in 1967, Duke Ellington was devastated. His closest friend and arranger had left his life full of music and memories. As a tribute, Ellington and his orchestra almost immediately began recording a tribute to Strayhorn, using the late arranger’s own compositions and charts. The album features well-known and previously unrecorded Strayhorn tunes that showcased his range, versatility, and, above all, the quality that Ellington admired him most for: his sensitivity to all of the timbral, tonal, and color possibilities an orchestra could bring to a piece of music. There are two versions of “Lotus Blossom.” Ellington claimed it was the piece Strayhorn most liked to hear him play. The LP version is a quiet, restrained, meditative rendition played solo by Ellington, with the most subtle and yet emotional nuances he ever presented on a recording as a pianist. Finally, closing the album is a bonus track, a trio version played in a whispering tone with only baritone saxophonist Harry Carney and bassist Aaron Bell accompanying Ellington. The piece was supposedly recorded as the band was packing up to leave. For a man who issued well over 300 albums, this set is among his most profoundly felt and very finest recorded moments.