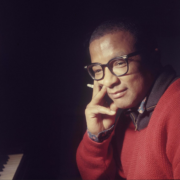 An all-star Broadway team with Tony Award-winners Billy Porter and Renee Elise Goldsberry and Tony nominee Norm Lewis will gather Oct. 2and 3 for readings in New Jersey and New York of “Something to Live For,” a biographical play about Pittsburgh jazz great Billy Strayhorn, written by Rob Zellers.

Pittsburgher Zellers is co-writer of “The Chief,” a solo play about Art Rooney Sr., and “Harry’s Family Service,” both of which debuted at Pittsburgh Public Theater. He had been its longtime director of education and left the Public to pursue writing projects. Zellers found a path to Strayhorn two years ago when he was reviewing a Duke Ellington biography for the Post-Gazette.
Mr. Lewis (“The Gershwins’ Porgy and Bess”; “Phantom of the Opera”) will portray Ellington for the reading. Mr. Porter, the Pittsburgh native who recently performed in two concerts in his hometown, is directing and will portray Strayhorn. Ms. Goldsberry, a Tony winner for “Hamilton” and, like Mr. Porter, a Carnegie Mellon graduate, will portray a parade of singers, including Ellington band vocalist Ivie Anderson, Sarah Vaughan, Lena Horne, Billie Holiday and Mahalia Jackson.

“There was a big section in the book about Billy Strayhorn. Since then I’ve read volumes, whatever I could get my hands on,” Mr. Zellers said by phone Friday. One helpful discovery was that Strayhorn’s lyrics were mostly autobiographical, which fits nicely into the play’s narrative. “Something to Live For” covers “pretty much his life,” said Mr. Zellers, through Strayhorn’s graduation from Westinghouse High School to his move to New York and his death “all too young” from esophageal cancer, at age 51. “I believe Lena Horne was his great love,” Mr. Zellers said. “He was a gay black man in the middle of the 20th century, and in jazz, which was sort of a macho field, but Lena Horne was his soul mate. His beloved mentor was Duke Ellington, and his other great love was the pianist Aaron Bridgers.” Nathan Darrow (“House of Cards”) will appear as drummer Mickey Scrima and Matthew J. Harris as pianist Bridgers.

The reading Oct. 2 is part of a free series at Theater at The Woodland in New Jersey. The next day’s presentation is for invited members of the industry at New York City’s Second Stage Theater.