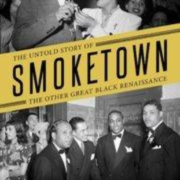 SMOKETOWN;
The Untold Story of the Other Great Black Renaissance, by Mark Whitaker, profiles a number of notable black figures from Pittsburgh and explores the intersection of their lives from the 1920s to the 1950s. Each personality, in separate chapters, provides an entree into a major “Smoketown” social, political or cultural development, be it sports, entertainment, the media or the arts.  You can read an excerpt below, highlighting the relationship of Pittsburgh residents Billy Strayhorn and Lena Horne.