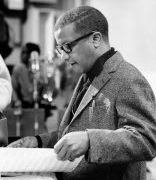 PlayBill, the go to website for up and coming Broadway caliber plays, recently announced The Acting Company’s Louanna O. Carlin and the John MacDonald Reading Series will showcase a reading for a potential big stage play: Billy Strayhorn: Something to Live For.

Billy Strayhorn: Something to Live For,  is directed by Broadway veteran Kent Gash. The play reading will be March 6th at 7 PM at the Mainstage Theater in New York City.  Featuring music from the jazz legend, and a book by playwright Robert Zellers with Kent Gash, the work explores Strayhorn’s collaboration with Duke Ellington and his life as an openly-gay jazz innovator. We look forward to hearing more about this play heading to the Big Stage and Broadway!

Each year, The Acting Company hosts a series of staged readings to showcase the works of their alumni. The Acting Company has launched the careers of nearly 500 actors, including Kevin Kline, Patti LuPone, Mary Lou Rosato, Keith David, and Rainn Wilson.

The Library Of Congress 2023 Concert Series To Include A 3-Day Celebration of...
Scroll to top