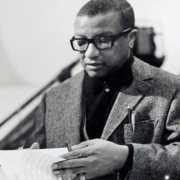 The Great American Songbook Hall of Fame celebrates lyricists, composers, and performers who helped to create “the soundtrack of our lives” with their contribution to American Popular song. Hall of Fame inductees are chosen based on factors including musical influence on other artists, length and depth of career and body of work, innovation and superiority in style and technique; over all, musical excellence is the essential qualification of induction. Billy Strayhorn will be inducted into the Great American Songbook Foundation Hall of Fame as part of the 2021 class. This is a great honor.

There will be several events that will be part of the celebration. One of the event activities is described below: