Suite Life is an annual celebration of the life and legacy of pianist, composer and KST namesake Billy Strayhorn. For one night only, percussionist extraordinaire and Pittsburgh jazz icon, Roger Humphries and the RH Factor take the audience on a musical exploration that invokes Pittsburgh’s rich contribution to the history of jazz.

The concert is preceded by a VIP reception, and proceeds benefit the Strayhorn Legacy Fund, which supports youth and family programming at the Kelly-Strayhorn Theatre.

Composer-arranger Billy Strayhorn lived his life as an openly gay man during the 1940’s, 50’s and 60’s, an oppressive and homophobic era. ‘Halfway To Dawn’, a music and dance performance, recognizes the life of Strayhorn, who mostly shied away from the jazz spotlight and remains an under appreciated and acknowledged composer.

‘Halfway To Dawn’ will world premiere in Los Angeles from October 4th to the 7th at the REDCAT theatre. The tour will then travel the country and conclude in Minneapolis April 13th, 2019. Tickets are $12-$30.

The Billy Strayhorn Foundation (BSF) has given out $3,000 so far in 2018 to assist students and institutions with tuition, summer camp attendance and jazz studies program assistance. The Billy Strayhorn Jazz Education Scholarship Award has assisted over 20 young musicians in the past 10 years and continues to grow.

Congratulations to both our individual and school music program recipients!

“Take the ‘A’ Train” remix part of best selling contemporary jazz album in the summer of 2018.
Grammy nominated saxophonist Dave Koz, along with some of today’s best contemporary jazz artist, have come out with a stunning set of 11 timeless tunes reimagined by Koz and alto saxophonist Gerald Albright, tenor saxophonist Richard Elliot, trumpeter Rick Braun and trombonist Aubrey Logan.
Narrowed down from an original list that was in the hundreds, ‘A’-Train ended up being one of the final 11 songs. It is given a contemporary arrangement, including being merged with the beat of a song by hip hop icon Jay Z (Roc Boys). The mix of a jazz classic and a modern music hit is pulled off seamlessly.
Check out the song (and the album) on all streaming services and YouTube.

Northrop announces its 2018-19 Dance Season featuring 10 remarkable dance companies, including David Rousseve/ Reality, the American Ballet Theatre, The Joffrey Ballet, and Alvin Ailey American Dance Theatre. Northrop is a center of discovery and transformation that connects the University of Minnesota and communities beyond by celebrating innovation in arts, performance and academics.

Written, choreographed and directed by David Roussève and performed by his diverse nine-member company REALITY, Halfway to Dawn is a vibrant multimedia dance/theater work based on the life of Billy Strayhorn, collaborator and arranger for the Duke Ellington Orchestra. While composing some of the most gorgeous American music of this century, Strayhorn was one of the few jazz artists to be openly homosexual in postwar Harlem. The production is the last of the Northrop stage performances of the season on April 13th, 2019. The Northrup Center is located at 84 Church Street, in Minneapolis, Minnesota.

Paris, Washington, D.C. April 9, 2018 —The Director-General of UNESCO, Audrey Azoulay, and UNESCO Goodwill Ambassador Herbie Hancock today announced the program for the 2018 edition of International Jazz Day, with events in Saint Petersburg (Russian Federation), this year’s Global Host City, and over 190 countries around the world.

A series of educational and outreach programs will take place in the Global Host City, where the day will culminate in an extraordinary all-star concert at the historic Mariinsky Theatre, an event which will be streamed live worldwide. Partners on the seven continents will celebrate jazz as a universal language of peace on International Jazz Day, celebrated every year on April 30th.

The 2018 Jazz Appreciation Month Poster is the second in a special three-year series featuring the center section of LeRoy Neiman’s Big Band, a large-scale painting that hangs on the first floor of the National Museum of American History. The JAM Posters from 2017 and 2019 feature the left and right side of the painting respectively, so that when all three are hung next to each other, the iconic painting can be recreated! Big Band is a gift of the LeRoy Neiman Foundation.

This year, JAM invites all jazz fans and appreciators to look beyond the music to the dynamic ways jazz has played a transformative role in social justice, musicians’ rights, and equality. The featured JAM artist this year is producer Norman Granz. Granz devoted his life to civil rights and equality – within the music industry and beyond. Through numerous record labels and his iconic touring show, Jazz at the Philharmonic, he helped propel many jazz musicians to greatness. Fittingly, all the musicians featured in this section of the JAM poster had careers that overlapped or were influenced by Norman Granz. They are: Charles Mingus, Benny Goodman, Gerry Mulligan, Lester Young, Charlie Parker and John Coltrane.

We celebrate some of the ladies of Jazz who musically touched Billy Strayhorn. We Salute:

The musical tells the captivating story of musical genius Billy Strayhorn as he navigates a world rife with homophobia and racism: We see him develop relationships with jazz legends Duke Ellington and Lena Horne as well as his romantic partner for several years, Aaron Bridgers. Nominated for 8 awards, WHEN JAZZ HAD THE BLUES won in 3 categories: Best Musical Direction, Best Ensemble Cast and Best Set Design. Its initial production was at the Matrix Theatre in Los Angeles.

The 27th annual theatre awards ceremony was held February 26th at the Millennium Biltmore Hotel in Los Angeles. The mission of the NAACP Theatre Awards is to entertain, educate and inspire as well as create diversity in the arts and entertainment industry. 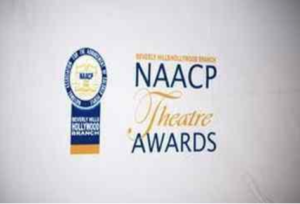