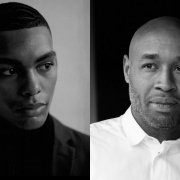 Rapidly becoming an audience favorite for his abilities as an improviser and crafter of nuanced programs that explore the conversations between jazz and classical idioms, pianist Aaron Diehl returns to the stage in a new collaboration with the up-and-coming vocalist and librettist Joshua Banbury. Banbury’s operatic libretti have been presented by Washington National Opera, The American Lyric Theater, Fort Worth Opera, and The Coalition for African Americans in the Performing Arts.

In a program that honors ignored figures in the history of African American music of the twentieth century, Diehl and Banbury pair together the music of Billy Strayhorn and Julius Eastman. Strayhorn spent much of his career in the thrall of Duke Ellington as a composer and arranger, only later receiving due credit for writing hits like Take the A Train and Lush Life. Similarly invisible in his own lifetime, composer Julius Eastman’s music has only recently been revived thanks to the passionate advocacy of a number of contemporary musicians. An experimental innovator whose style blurred the lines of art, music, and theatre, the ongoing Eastman revival shows the powerful endurance of art and expression on the margins.

All this takes place at the Phillips Collection Art Museum in Washington DC. Located in the Dupont Circle neighborhood, The Phillips Collection opened in 1921 and is America’s first museum of modern art.[7] Featuring a permanent collection of nearly 3,000 works by American and European impressionist and modern artists, the Phillips is recognized for both its art and its intimate atmosphere. It is housed in founder Duncan Phillips’ 1897 Georgian Revival home and two similarly scaled additions.

THIS EVENT IS SOLD OUT!!

This event will be broadcast live from the Music Room on Sunday, January 15th at 4 PM. To reserve a ticket, go to phillipscollection.org for more info. All registered ticket holders will receive a link directing them to a livestream webpage where the performance can be accessed. Ticket holders will be able to watch this performance “On Demand” for 48 hours following the broadcast time.