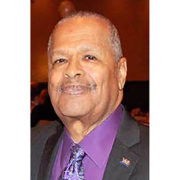 Gregory A. Morris, Ph.D. is a retired educator having served as Director of Reading and Literature for the Pittsburgh Public Schools and later as an Associate Professor in the University of Pittsburgh’s School of Education.

Dr. Morris earned his Bachelor of Science, Master of Education and Doctor of Philosophy from the University of Pittsburgh.

Gregory’s commitment to community service is exemplified by his service and leadership on numerous Boards of Directors such as Pace School, Schenley Heights Community Development Program and The Western Pennsylvania School for Blind Children, just to name a few. He has always been actively involved it church. Currently he serves on the Men’s Ministry of Pilgrim Rest Baptist Church.

Dr. Morris is married to Thelma Lovette Morris and has three children and two grandchildren.