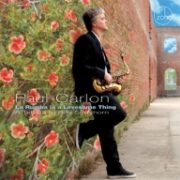 What would Billy Strayhorn think of La Rumba is a Lovesome Thing? It is, after all, relocated from its original big band setting into the Latin realm—to the maestro who singlehandedly transformed the sound and spirit of The Duke Ellington Orchestra for a quarter of a century, from 1942 until 1967. Superbly orchestrated by its leader Paul Carlon, most of the significant touchstones of Mr. Strayhorn’s great repertoire are featured on the record, or as many as can fit on a single disc and each is performed with a surprise and a delightful twist. La Rumba is a Lovesome Thing shows the flexibility of Strayhorn’s music, still sounding fresh and relevant not only in another era of music, but still having that beauty and meaning in an altogether different metaphor.