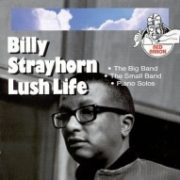 “Although not released until 1992, 25 years after composer Billy Strayhorn’s death, this is his definitive CD. Strayhorn is heard singing Lush Life while backed by the Duke Ellington Orchestra in 1964. These are very valuable and intriguing recordings, shedding some light on a nearly invisible genius” – Jazz commentator Scott Yanow

The Peaceful Side 1961(original release)
Scroll to top