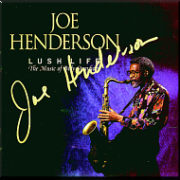 Joe Henderson won a Grammy Award and world wide acclaim for his CD, ‘Lush Life’. Strayhorn wrote the title composition for this CD while still a teenager in Pittsburgh. Henderson shows absolute respect for Strayhorn’s material, with the help  of some fine sidemen, including Wynton Marsalis on trumpet, Stephen  Scott on piano, Christian McBride on bass, and Gregory Hutchinson on drums,  a collection at that time of some of the finest young talent around.

The Strayhorn Project
Scroll to top