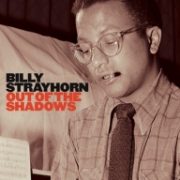 This superb box set celebrating the work of William Thomas Strayhorn echoes the basic paradox of this extraordinary jazz musician’s life and career.

The richness and diversity of the music it contains will delight the most obsessive Strayhorn aficionado; at the same time it offers a thrilling introduction to the man many know only as someone who once played in Duke Ellington’s band and wrote “Take The “A” Train.

The 7 CDs contain material presenting 62 of Strayhorn’s compositions, not only focusing on his work outside of the Ellington orchestra, but also presenting him in Duke’s company.

Billy Strayhorn, the man whose musical abilities could have made him a star in his own right, labored in the shadow of a world-famous benefactor. This collection of his recordings puts him firmly in the spotlight for once, revealing beyond doubt the true scale of his musical genius and contribution to jazz.

We’ll Be Together Again
Scroll to top