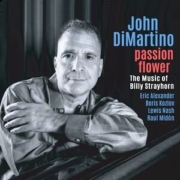 Billy Strayhorn’s music has been an essential part of composer, arranger and pianist John DiMartino’s repertoire since the beginning of his forty-five year professional music career. He recalls, “My first encounter with Strayhorn’s music was through an older cousin who gave me a recording of Chet Baker and Russ Freeman’s version of Lush Life and requested that I learn the tune.” DiMartino was just 15 years old at the time (ironically, Strayhorn’s age when he wrote the piece. John has been entranced with the composer’s music ever since.

In recent years John has been performing Strayhorn’s music with Paquito D’Rivera. Executive producer Neville Grusd heard a concert they did at Flushings New York Town Hall, which led to his interest in producing this recording.