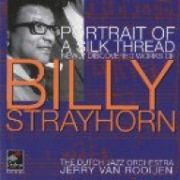 The first of 4 CD’s recorded by the Dutch Jazz Orchestra, This CD begins to bring into focus the prolific composing that Strayhorn did during his career. According to Walter van de Leur, author of Something to Live For: The Music of Billy Strayhorn, on the average Strayhorn wrote at least one piece a week during all thirty years he worked with Duke Ellington. That was more than the Ellington Orchestra could handle, especially since Duke himself composed a huge amount of material. Choices had to be made and thus many pieces fell by the wayside, never having appeared on any of Duke’s many records. Among those were probably some of the finest works Strayhorn ever wrote. Luckily, the music of Strayhorn has been preserved for future generations in hundreds of handwritten scores.

The present CD contributes to the documentation of the rich collection of unknown Strayhorn material still to be played. Eight tracks on this CD feature pieces that were never heard before. The other tracks were recorded by Ellington or Strayhorn at some point in the past, but this CD gives the original first versions, often written decades earlier than their issued counterparts.

You Go to My Head. Strayhorn and Standards
Scroll to top