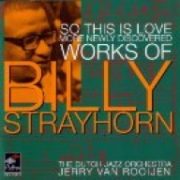 CD #3 is the successor of the widely acclaimed Portrait of a Silk Thread: Newly Discovered Works of Billy Strayhorn, which was first released in 1995. Again, the Dutch Jazz Orchestra plays Strayhorn works that have never been recorded before. In a number of instances, these works have never been performed either. The selection includes works that Strayhorn wrote or arranged while still in Pittsburgh: So This Is Love, Remember and Valse. Strayhorn wrote these four pieces for quite different occasions. The Chopinesque Valse was a piano solo which he must have performed numerous times as the piano-playing errand boy from Pittsburgh’s Pennfield Drugs, while So This Is Love in all likelihood was intended for his first theater show, Fantastic Rhythm.

Other works evolve around the Copasetics, a group of tap-dance professionals Strayhorn presided. Their yearly revues were packed with Strayhorn originals and from these origins stem Feet on the Beat (from the 1961 Copasetics revue On the Riviera) and Swing Dance (from the 1962 Anchors Aweigh).

Something to Live For: The Music of Billy Strayhorn
Scroll to top