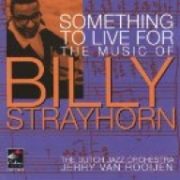 The larger part of the pieces on this fourth Strayhorn CD evolve around music Strayhorn wrote for the theater. In 1935, just out of high school, he composed a short show Fantastic Rhythm. A handful of numbers have survived, including the title song and the tune Let Nature Take Its Course. Another group of theater works stems from 1953, when Strayhorn provided music to a Federico García Lorca play titled The Love of Don Perlimplín for Belisa in Their Garden. Apart from Wounded Love—premiered by the Dutch Jazz Orchestra on Portrait of a Silk Thread—his unrecorded score includes Sprite Music, The Flowers Die of Love and Love, Love. He wrote Everything Is Copasetic! for one of the annual shows by the Copasetics, a group of tap-dance professionals who were Strayhorn friends as well as club memebers. From the early 1950s on, they staged cabaret style fundraisers that unfortunately were never recorded, with music and lyrics largely by Strayhorn. These shows were important events in New York’s black community, and played to sold-out venues.

The Nutcracker Suite
Scroll to top