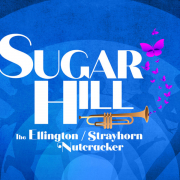 Producer David Garfinkle announced that the World Premiere of Sugar Hill The Ellington/Strayhorn Nutcracker, the jazz-steeped reimagining of The Nutcracker based on the genre-defying collaboration of Duke Ellington and Billy Strayhorn, will debut at Pittsburgh’s Benedum Center for the Performing Arts from October 19-30, 2022. The production was supposed to follow with a run at New York City Center (131 W 55th St.) from November 15-27, 2022.  Unfotunately, the production has been postponed until 2023 at this times, Please stay tuned for that dates and times when this production excitingly resumes.