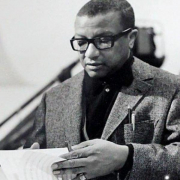 WASHINGTON, DC– The Library of Congress has announced the Spring and Summer 2023 concert series, Series Presents. It will feature a June 8th, 9th and 10th tribute to Billy Strayhorn and to celebrate the 2018 acquisition of the Billy Strayhorn Manuscripts along with an array of Strayhorn archival material. The 3 day celebration will include musical tributes by some of the great jazz artists of today, as well as a panel discussion and movie screenings highlighting Billy Strayhorn’s contribution to both films cinematic success. The events will be presented live in the historic Coolidge Auditorium unless otherwise noted:

Join for the keynote lecture at 4 p.m. by Strayhorn biographer David Hajdu, followed by a panel discussion at 5 p.m. Presented through the generous support of the Revada Foundation of the Logan Family. Part of the Library’s “Salute to Strayhorn” celebration. Register for tickets here.