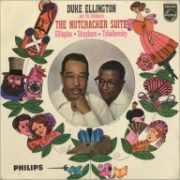 Recorded for the Columbia label in 1960 featuring jazz interpretations of “The Nutcracker” by Pyotr Illyich Tchaikovsky, arranged by Ellington and Strayhorn. The album was rereleased on CD in 1990 as part of Three Suites along with Ellington’s reworking of Grieg’s “Peer Gynt Suite” and “Suite Thursday,” his tribute to John Steinbeck. The original 1960 cover is notable for the inclusion of Strayhorn’s name and picture along with Ellington’s.

Out Of The Shadows, Storyville Records
Scroll to top