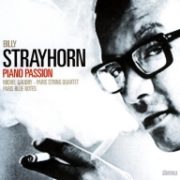 “After more than 20 years as an inextricable element in the musical complex that is Duke Ellington, Strayhorn emerges in these performances, recorded in Paris, as a personality in his own right. This is a lovely, low keyed set,” wrote John S. Wilson in Down Beat magazine, 1961. Most of the songs are from Strayhorn’s first decade as a composer, showing an introspective side of Billy playing from a very personal perspective.