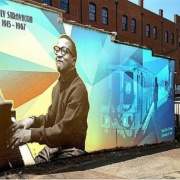 A renovation project to restore a piece of Hillsborough’s history, will be done by a local artist. It will be the first downtown mural: a tribute to jazz pianist and composer Billy Strayhorn.

Artist Max Dowdle reached out to the town about painting a mural, economic development planner Shannan Campbell said. The mural, “Take the ‘A’ Train,” will honor Strayhorn and collaborator Duke Ellington’s signature composition and feature Strayhorn playing a piano on a field of yellows and blues with a train in the background. The painting could start in early to mid-August 2019 and take about two weeks, Dowdle said.

Strayhorn, who was born in Dayton, Ohio, often visited his grandparents’ home in Hillsborough as a child. His father and grandfather worked at the Eno Mill, and he would take the train to visit an uncle in Durham, the Orange County Historical Museum reported. At age 23, Strayhorn joined Ellington’s orchestra, becoming an influential figure in American jazz. He stayed with Ellington until his death at age 51 in 1967.