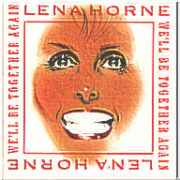 Lena Horne returned to the stage to perform for the New York JVC Jazz Festival. She dedicated her performance to her late soulmate, Billy Strayhorn. She was so energized as a result of this outing that she agreed to go into the studio and cut a new CD; again a tribute to her closest friend and soulmate. There are several Strayhorn compositions which he created especially for Lena on this CD.

…and His Mother Called Him Bill
Scroll to top